Look back and see what you’ve accomplished

As time flies by, you can sometimes get the feeling that things are out of your control. You get a feeling that nothing concrete has come from ‘your hands’; and doubt can creep in your head. This is a good time to look back and reflect on what really happened… This happened to me the other day, and my VA Sian, reminded me of everything that has been achieved (thank you!!). Once I looked back at this, I am able to tell you: a LOT has happened. I also have some big news! Yay… I ♥ Journaling Day is back again!

In February, I launched the prototype version of Day by Day, the 13-week Journal, and many of you joined me in an elaborate 13-week test!

After a few weeks, I can admit that I got overly excited and created what I called version 2.2, also now known as “the big fat failure”. This was a hardback version that fell apart and collapsed as soon as you opened it. Whilst Sian and I were working busily in the background to try get a ‘decent version’ from the printer in question, (basically one that DIDN’T collapse and fall apart at the least), I got more insights and it became clear that I had ‘jumped the gun’ a bit on v2.2. But, make no mistake – I genuinely love “the big fat failure”! It was my growth catalyst.

A few weeks into the second 13-week cycle, myself and others found that journaling twice a day could become a bit too much. Especially the way I had designed it. My design-principle is ‘simplicity’: things shouldn’t need a lot of explanation, and what can be removed… should be removed.

My design-principle is ‘simplicity’: things shouldn’t need a lot of explanation, and what can be removed… should be removed.

While I was overthinking the task of how to simplify Day by Day, another bombshell was dropped on me… A bombshell from someone in my Mastermind Group. He said, “why on earth didn’t you do a Dutch version?”… Well, that’s the gist of what he said, as a lot more was included!

After some research, I accepted (albeit reluctantly), that it wasn’t a bad idea at all, and I shouldn’t have dismissed the Dutch market in the first place… Shame on me. 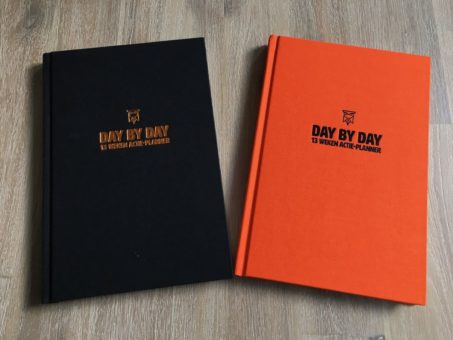 The simpler and fresher version of Day by Day, WILL be introduced to the Dutch audience first! Yes, my dear Dutch friends, you have THE scoop and can expect it as soon as next week!

A new printer, New Energy Drukwerk, has re-lit an old fire in me. You see, I’m formally trained as a graphic designer: print!

When I visited their offices in Vianen, I got the opportunity to look at their portfolio of books and other creations. My heart literally jumped for joy as a former love of mine was rekindled: print! Textures… finishes… techniques… I had to ask myself, “how come I didn’t do this in the first place”?

I’ll admit that the journal will be exponentially more expensive to produce, but… It WILL be so pretty! This is a journal you WILL want to be seen with – I promise you. And, it won’t fall apart!

Law of attraction at work

When I started out in January, I had a vision that version 3 would be available in the summer: a proper notebook, with all the right features; like bookmarks and an elastic band.

HA! The power of thought and visioning.

If you have a CLEAR vision, and WANT it with ALL your being and work REALLY hard… you will get it done!

When I get to hold my new babies in my arms next week, I will be OVER THE MOON… Not just for me, but also for YOU, I am so excited for you guys! 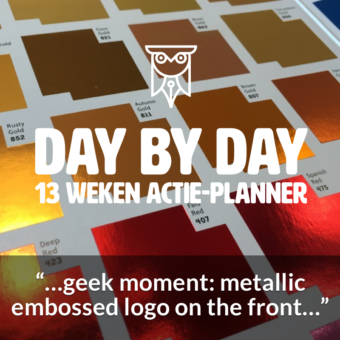 I want you to imagine something for a minute, so stick with me… Imagine: a cloth material cover… embossed metallic print… bookmarks… elastic cover holder!

I don’t know about you, but I am so stoked about this. Is it just me having a geek moment, or can you feel it too?

The promise of a fresh new journal: inviting YOU to be your BEST self (no pun intended guys). You get to run with your idea, to get it done with a FULL focus (again no pun… OK, just a bit) cycle of 13 weeks.

And, it’s not all about the pretty cover, deluxe finish, 2 bookmarks and elastic band: the inside has improved SIGNIFICANTLY! 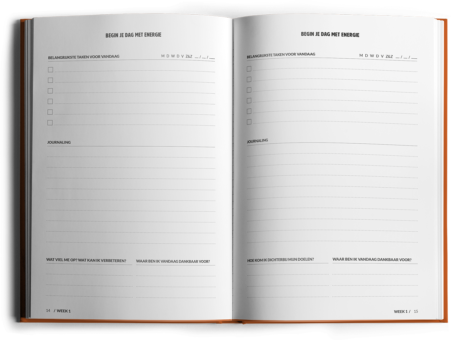 With more guidance, you go from a long term vision to the 4 major goals you can take on in 1 year, to get to YOUR overarching vision. Day by Day is a 13-week journal, specifically designed for you to work on those 4 goals and set yourself realistic targets and milestones for that 13 week cycle. And… after you have completed those 4 cycles, you WILL have completed your goals for the year, AND gotten significantly closer to your seeing your long-term vision come to fruition!

This AMAZING new version of the journal comes with: a weekly planner; daily journaling; AND weekly reviews… Everything you need to get the job done. Don’t allow yourself to just sit there thinking… MAKE yourself do!

Remove friction and outline the tasks that need to be completed in advance – then, you can just show up daily and do the work, without having to think about what needed to be done in the first place. 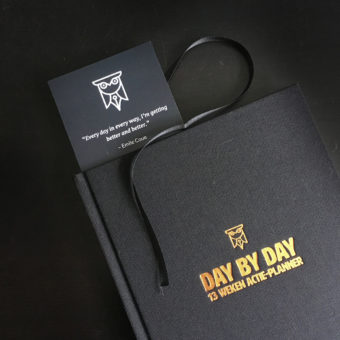 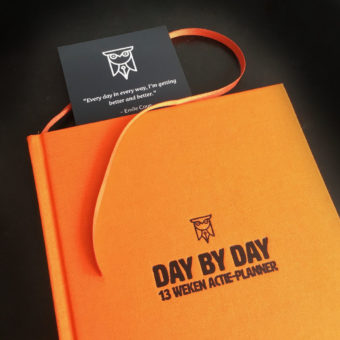 The Dutch version can be ordered in black or orange (in true Dutch style) on 15 September 2017. I ♥ Journaling Day II, and to all the English fans out there: you can soon pre-order your V3 in black, which will be expected later this year!

As I started to write this post, I wondered what I had ‘done’ recently. I feel much better looking back by the way, and ‘seeing’ what I did to get the v3 ready for next week.

That’s not all though, as of 2 October, I’m starting a 5 day #IdeaChallenge. In 5 days I will help you pick an idea to stick with, and work on for let’s say 13 weeks? Are you in? Just 5 short days, where you can go from, “I have sooooo many ideas” to “I’ve got a brilliant idea (and I know exactly how I’m going to execute it)”!

You can sign up here, or wait for the dedicated blogpost next week, where I will outline the 5 day #IdeaChallenge in full, so you know what to expect.

Thanks for reading, you are awesome. But you know that, right?!